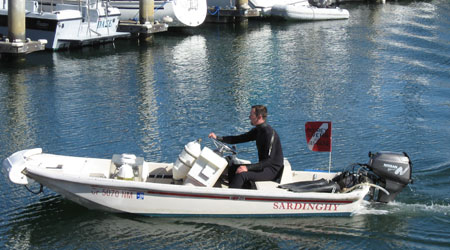 Del Rey Divers is the oldest dive service in Marina Del Rey, cleaning the bottom of boats, with the same ownership since 1964. Our cleaning program is based on 50 years of experience & the simple premise that if you have to scrape a considerable amount of coral marine growth from a regularly maintained boat bottom, then too much time has elapsed between cleanings.

Boat bottoms need to be scheduled & cleaned more often to avoid excessive marine growth & the subsequent loss of the boat’s performance. We tailor our underwater maintenance program to the needs of each individual boat bottom with respect to the season & the condition of the anti-fouling paint. 20 years ago Del Rey Divers implemented 3 changes in our prior cleaning program, giving us the best maintained boats in Marina del Rey.

First, Del Rey Divers started cleaning all the boats it maintains, that have anti-fouling paint in good & fair condition, every 3 weeks during the summer months from June to October & keeping the previous 4 week cleaning schedule only for the winter months of November through May. The previous practice of cleaning the boat bottoms every 4 weeks in the summer did not keep the boat bottoms clean enough, as the summer marine growth accumulates 2-3 times as fast as in the winter due to warmer water temperatures & more sunlight, so the boat’s performance suffered. Did you know that during the summer as much marine growth can accumulate during the 4th week as the 3 previous weeks combined?

Second, boat bottoms that have poor or no anti-fouling paint* that are cleaned every 14 days in the winter, are now cleaned every 10-11 days in the summer. Why? Because at 14 days in the summer, the coral that accumulates on a boat bottom with poor or no anti-fouling paint* is so large that it requires scraping to be removed & the boat’s performance is compromised due to coral fouling of the hull, propellers & engine water intakes; causing overheating engines, slower speed & poor fuel economy. Also, by going to a 10-11 day schedule, the coral can be scrubbed off with steel wool in 1/3 of the time it would take to remove the coral marine growth 3 days later with a scraper.

Third, as the unpainted metal surfaces on powerboats, such as props, shafts, trim tabs, struts, rudders, engine intakes, outdrives, etc., accumulate so much coral marine growth during the summer, a 10 -11 day cleaning program was implemented, for the same reasons previously described for boat bottoms with poor or no anti-fouling paint*. This “Metal Cleaning” program is performed between each regular 3 week complete cleaning & allows powerboats to perform as well in the summer as in the winter.

Del Rey Divers cleaning program is tailored to the boat owner who wants to use his boat at any time & achieve a trouble-free experience with regard to the boat bottom. At Del Rey Divers, we feel that our underwater maintenance program may appear to cost more, but actually saves money when considering a faster hull speed, higher engine R.P.M., less fuel consumption and cooler running engines.

*No Paint: It should be noted that most boat builders recommend painting the bottom before the diver wears through the paint to avoid scratching the fiberglass gel coat; The opinion being that scratches in the gel coat allow water to enter the fiberglass and resin below the gel coat, which can possibly lead to the formation of gel coat blisters.

CHANNEL ISLANDS HARBOR / OXNARD
Since moving the office of the Del Rey Divers’ to Oxnard in 2003, Del Rey Divers has expanded it’s services to include the Channel Islands Harbor / Oxnard. As the marine growth is less aggressive in the Channel Islands Harbor than Marina Del Rey, the underwater maintenance program (boat bottom cleaning) is adjusted; Boat bottoms with bottom paint rated in fair to good condition can be cleaned every 4 weeks all year round. We also recommend that boat bottoms with bottom paint rated in excellent condition be cleaned every 4 weeks all year round to increase boat speed, conserve fuel and the need to inspect zincs every Month for corrosion control. Boat bottoms and outdrives with poor or no paint*, need to be cleaned every 2 weeks Winter and Summer.

I, Steve Goldberg, first started my company, Del Rey Divers, in November of 1964. At first I had just one customer, my dentist who was also a family friend, Dr. Bernard Jurist. The company at that time was called Hull Cleaning Service and I had turned 14 years of age 2 months earlier in September. As I could swim before I could walk, it was easy to start Skin Diving at the age of 12 with my aunt Jewel (Jewel K. Griffin, alias Antique Jewel).

In the summer of 1965, my business took off; I had left a Hull Cleaning Service card on the bulletin board at Del Rey Yacht Club, which at that time was a trailer parked in its present location. Nat Blacther, a member and past president of the club, saw the card and gave me a call at my parents home at 19 Breeze Avenue, Venice Beach. I would start washing the topsides and cleaning the bottom of Nat’s 27′ Tollycraft,, Kip a Loo ?, for the next 10 years. Nat and I became friends and with his wife Kitty, we went to the Catalina Isthmus, Cherry Cove and Avalon during the summer of ‘65 and ‘66.

Until I was 16, I rode around the Marina in my wet suit on a bicycle, going from boat to boat, mainly cleaning boat bottoms. Until I was 18, I cleaned boat bottoms holding my breath. I bought my first compressor from the infamous Stan Kaplan, who I had met earlier in my diving career, but was to know better when we both were required to become certified divers by a new L.A. County statute. Stan, my good friend Mike Grossman, and I, were all certified at the Hotel Monica’s swimming pool ( latter to become the Sandcastle, and now gone), through the NAUI certification program taught by Tex’s Sporting Goods, located at Ninth and Wilshire in Santa Monica (also long gone). Stan had acquired the dive company called Yacht Service Co., from a certain Chuck Wade. I had met Chuck on the docks of Villa Del Mar Marina (which was just a parking lot with boat slips) in 1965, where Chuck told me that I couldn’t clean boats there, as he had the sole rights from the management. I ignored what seemed to a 15 year old as a threat and never saw Chuck again. Chuck was latter arrested for bank robbery and somehow Stan, an employee of the company, became the owner. Stan was a ruthless business man and stopped at nothing to build his company from 100 boats to 1,000 in a few years. Stan, while building his Yacht Service Company would end up shooting and killing his brother in law at the Yacht Service office on Washington Bl. Stan would also demand that the Habor Patrol enforce the rule that all divers while diving, had to have a tender topside for safety. If Stan had to pay tenders to stay topside, while his divers cleaned boat bottoms, then everybody had to. Once while I was at the Yacht Service Company office, Stan got a call that Bob Kegley, a competitor and owner of Marina Divers, was diving without a tender. Stan immediately called the Harbor Patrol and gave the officer the location and name of the violator. Then Stan and I jumped into one of his Yacht Service Econoline vans and went to see the circus. Harbor Patrol Officers were all over the docks looking for the violator, but never found him. Bob Kegley had either taken his scuba tank off of the dock or had been free diving and had evaded his captors.

In the early years of Marina Del Rey, there were many Harbor Department regulations that were inforced by the Harbor Patrol, before it became part of the Sheriffs Dept. One of which was to be registered with the Harbor Dept. before one could work on the docks. The problem was that you had to be 18 years old, which I was not. I had been in business for 4 years before I turned 18 and met the qualifications to operate a legal business. So I was constantly looking for the Harbor Patrol boats so as not to be asked to stop working on the docks. Another regulation was to hang a dive flag on the boat your were diving below as a safety precaution so the boatowner would not start up the engines. In order to evade the Harbor Patrol, I would not hang a flag for fear of being caught. I was once nicely asked to stop diving by Corporal Finnigan, who would latter become Captain of the Harbor Patrol.

The name Del Rey Divers was created in ’66, while I was living at 2216 4th street in Santa Monica, California, with mv parents, still under 16, and still riding a bike to work. Becoming 16 and driving a car from boat to boat was Heaven. My first car was a ’67 Plymouth GTX, which I drove around in ‘my wet suit dripping salt water into the interior of the car, while servicing my accounts. The GTX at first was my mothers car, which my brother John and I had convinced my father to buy. My parents were not aware of the engine’s horsepower and the significance of a ” Musclecar”, until one day while my mom was driving the GTX, a young Hot Rodder pulled up along side revving his car’s engine and giving my mom that look, do you want to race.

I bought my first used air compressor from Stan Kaplan of Yacht Service Company. I could now stop holding my breath and allow the 110 volt compressor, plugged into the dock , to pump air down to me while I was servicing my customer’s boats.

About 1975 I bought my first Inflatable boat, which was a 13′ Avon, to work out of instead of a car or Van. At this time I also switched to using Scuba tanks, instead of a compressor, as it was easier not to have to get out of the boat and onto the dock to plug in the compressor and besides, the scuba tanks had more pressure than the compressors and with more air, I could work faster.